Last night I had planned to do a bit of work on the Moxon vise but two packages arrived at the office right before I headed home. One was an e-Bay purchase and the other was a package from Bill Rittner at Hardware City Tools so the evening plans changed to tool repair/restoration.

First the #5: I thought I could live with its missing chuck spring (I got it for cheap) but alas it started getting on my nerves so I ordered a new set of springs from Hardware City Tools (along with a replacement tote for my Stanley #8).

Disassembling the chuck was very straight forward (Bill has a nice walk-through) as this is a “newer” model which used a slot instead of two holes and it just so happens the slot is the same width as an old #5 Handyman plane iron I had in my spare parts pile. It was a simple matter of swapping out the old for new springs and cramming the suspended jaws back into the housing along with the 3-in-1 oil and screwing everything back together. 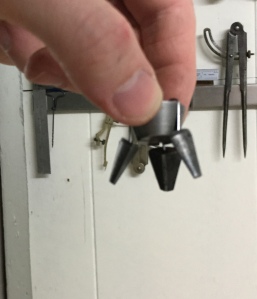 For some reason, Millers Falls #2A drills in good shape with a LRRCW have started going for stupid amounts of money on eBay so I decided to buy a couple of less desirable examples and try to restore them. Both of these drill cost less than 15 bucks because they have problems: the left one is missing its LRRCW, has had a previous drive gear repair, and is missing the handle end cap; the right one had a terrible drive handle, is missing a chuck spring, and is missing the side handle. 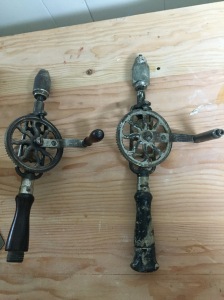 After stripping down both drills I determined the gears on the new one seated together better so that frame became the basis of the new drill. After Goo Gone and Goof Off both failed to remove the paint from the handle I pulled out some sand paper and discovered that what I assumed was a painted handle was actually rosewood so I wet sanded it with some BLO and will eventually add a shellac top coat. The old drill’s chuck, drive handle, and side handle were moved to the new frame and after some oil and adjustments I had a very nice new drill.

I did identify one problem with the new Frankenstein drill, the main shaft threads on the donor frame are damaged right at the base near the frame; this did not cause any problems with the previous chuck as it was a slightly shorter design however, when the new chuck is tightened completely this damage introduces some wobble. I am hoping this will not cause any issues as I typically use my #5 for small drill bits and the #2A for larger ones.